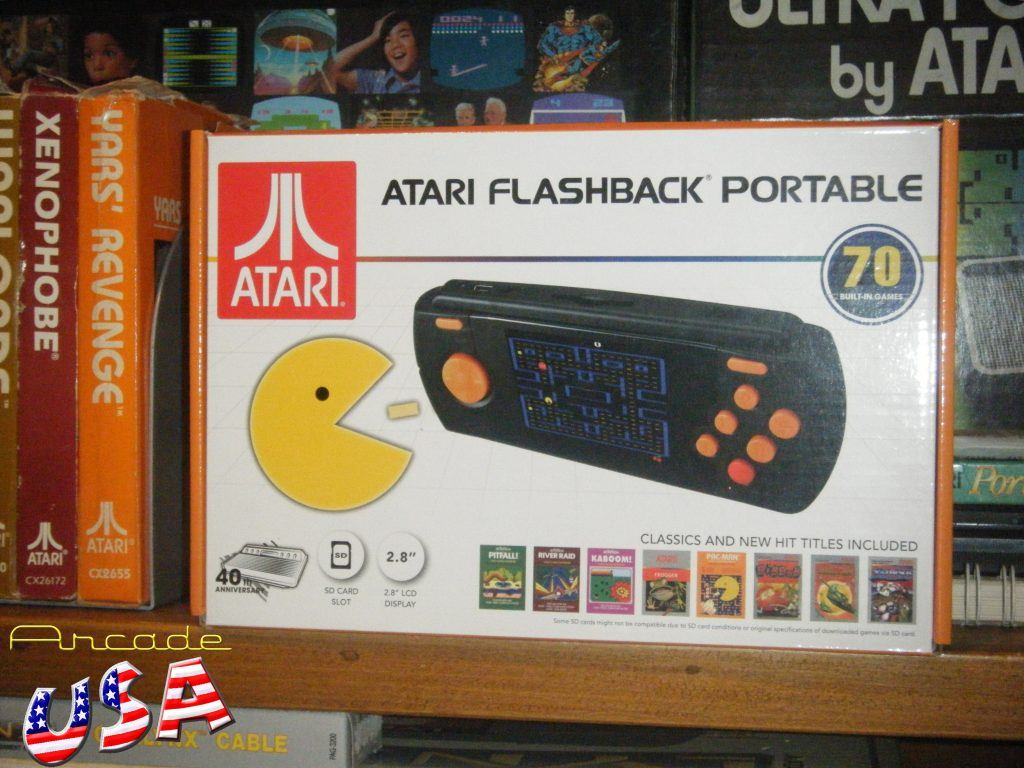 Released by Atgames September 2017, this little portable game player lets you take 70 classic Atari 2600 games on the go!  Plus it has a SD card slot!   Not all Atari 2600 games will work with this device though, so some experimenting will have to be done to see what ones you enjoy will work on this device.

With 10 more games that lasts years Atari Flashback Portable, some fun Activision titles have been added!  As before each game has a really nice box screenshot in the menu.  Here are the list of the additional 10 games!

The featured game on this device is Pac Man, however it is not the 2600 version of Pac Man but the Homebrew Pac Man 4K.  Its a nice port but the 8k version would have been nicer (less flicker).  For the 2600 Pac Man purist, the original can be added via the SD card slot.

One game I was very excited to see on the device was Kaboom, however using a Dpad with this game makes it nearly unplayable.   I had hoped AtGames would have put a dial on this unit for the paddle games.   Playing paddle games with a joystick very rarely works out, it only frustrates the player.

The unit itself is very similar the 2016 release, but with some minor changes

The unit now features a battery compartment, so replacing a worn out battery is much easier.  It can be charged from a USB port or a 6 volt charger.   The screen is still very crisp and bright and measures 3.2 inches like the 2016 version.  I think the colors look better on the 2017 version.

Sound is not as loud as the 2016 version, but does sound slighlyt better on some games.  However if you use the headphone jack the sounds are greatly improved.  The SD card port is what really makes this device interesting!  Care must be taken to make sure the unit is off before removing or inserting the card as damage can occur (according to the manual).

Adding games to the SD card is very straight forward.  Just put the games in a directory called “GAME” and if the unit can recognize the roms they will be listed (I had to rename the space invader rom in order to get it to show up).  If the unit cannot recognize any games it will just go back to the SD Card Browser icon in the main menu.

Also be aware that the more files you have on the SD card the longer it seems for it to “index them”.  So if the SD card menu does not come up immediatly, wait a few seconds.  At the time I reviewed this I was able to get 91 additional games to run on the device.

Overall I really like this new Portable Atari 2600.  I only wish they had some way to include a control for the paddle games, playing breakout, circus Atari or Kaboom with a dpad takes the fun right out of it.