Posted on September 15, 2020 by MichaelBtheGameGenie 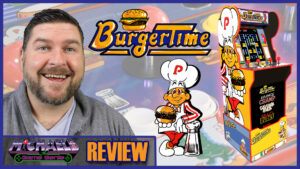 Mike takes a look at the Limited Edition BurgerTime Arcade1Up. Mike loves burgers and loves BurgerTime but was this release from Arcade1Up a beefy treat or was it a disappointing sandwich? Find out in today’s review!