Matt Reviews Eye of the Beholder 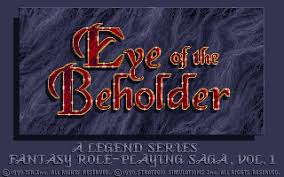 Westwood’s Eye of the Beholder debuted in 1991 for PC and Amiga, launching a trilogy of games based on the Dungeon Master model. However, the big selling point here is the implementation of the Advanced D&D ruleset. Don’t miss the end for a special R.A.T.S. chase!  I also show the Sega CD version here, which is quite neat.

About: Dr. Barton is an associate professor of English at St. Cloud State University in St. Cloud, Minnesota. He is host of Matt Chat, a weekly YouTube program dedicated to classic videogames for all systems. Matt Chat has been featured on several prominent Websites, includingGeek.com, Game Banshee, Blue's News, Tech Report, and RPG Codex. The show features historical retrospectives on important games as well as personal interviews with their developers and designers, including John Romero, Timothy Cain, Chris Avellone, and many others. He is the author of Dungeons & Desktops: The History of Computer Role-Playing Games (nominated forGame Developer Magazine's 2008 Front Line Award), author of Vintage Games: An Insider Look at the History of Grand Theft Auto, Super Mario, and the Most Influential Games of All Time, and editor of Wiki Writing: Collaborative Learning in the College Classroom. He is a founder of Armchair Arcade, a PC Magazine Top 100 Website mentioned on Slashdot, Boing Boing, Slate, and many other prominent tech and game-related publications and Websites. His other games-related writings have been published on Gamasutra andGame Studies. He is currently writing and producing a feature film documentary called Gameplay: The Story of the Videogame Revolution, for Lux Digital Pictures. Matt is presently responsible for Armchair Arcade's technical and editorial direction, as well as general content generation. Be sure to check out Matt and his work at the following links: [LinkedIn] [Facebook] [Twitter] [Amazon Author Page] [YouTube]
View all posts by Blacklily8 →